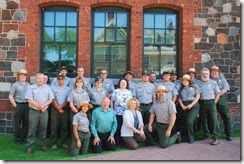 The Quincy Smelter has been fortunate that it counts the National Park Service as one of it's friends.

Although the Quincy Smelter is owned by Franklin Township, we are within the boundaries established by Congress for this park. By that fact, the township is eligible to receive assistance from the National Park Service as have many other historical sites in the Keweenaw.

There was concern raised by the Quincy Smelter Association over the gradual disintegration of the smelter's buildings. Roofs had  collapsed or were in danger of it.  Walls were coming down or weakened and dangerous. Birds had made their home in the many buildings. With no security, vandalism was ongoing. Artifacts were damaged, stolen, strewn around.  It was heading toward eventual demolition.

The smelter is in a valley on the Portage Canal, bracketed by Houghton and Hancock.  Along with the Quincy Mine on the top of the hill,  we present a striking and iconic image of copper history to visitors entering our area.

The people who turned a near ruin into one of the jewels of Keweenaw's history are the National Park Service staff.  Almost five years ago, they started replacing roofs, closing window openings, fixed collapsing walls, cleaning up the debris, cataloging the artifacts and much more.

Fast forward to 2013.  The Park Service put a new roof on the Mineral Warehouse.   A dominating presence next to the current recreation trail and former railroad right of way.  Trains drove up the incline with their copper ore and dropped them in the bins below.  Before a shingle could be put on, they had to replace weakened and decaying timbers and boards as well as removing the old roof slate.  They cleaned up the interior so future visitors can see another part of our proud heritage.  They did many more tasks that are helping preserve the other buildings in the smelter site.  John Rosemurgy, Steve D'Agostini and Steve Delong  and their crews deserve thanks for the work accomplished this past year.

On the education end, we want to thank Kathleen Harter, Valerie Newman, Brian Hoduski and Jeremiah Mason for their assistance and advice on historical interpretation and the fine museum exhibits workshop in November.

Vital to all this activity is the Advisory Commission.  It is made up of people in our community who have the expertise and interest to see the park continue to grow and improve. Scott See, Executive Director, wears many hats in coordinating with the multiple Heritage Sites comprising the "living history" of the Keweenaw. Scott's current challenge is overseeing the purchase of the Quincy Smelter from negotiating to fundraising and eventually bringing the smelter under the auspices of the Park Service.  We wish him and the board success in the coming year.

Credit for overseeing all this goes to Superintendent Mike Pflaum and his predecessor, recently retired Jim Corless.  Mike is transitioning to a new job as the head of the Pictured Rocks National Lakeshore near Munising, Michigan in 2014.  Good luck!

The Association looks forward to another exciting year with the National Park staff in 2014.

When the Association first started, a lot was accomplished with help from MTU faculty and students: making the community aware of the smelter's importance in Keweenaw history, fundraising activities, conducting tours, setting up blogs and much more.  That connection changed as students graduated and faculty went on to other activities. With their help, the smelter was on its way to being saved from the wrecking ball.

In 2013 contact was initiated again.  We thought the smelter association and the university would benefit from Michigan Technological University involvement. We want to thank Professor Tim Scarlett (above) for all his work and energy in getting students and faculty involved in the smelter.  Tim is director of Graduate Studies in Industrial Heritage and Archaeology.

John Baeten and Joe Licavoli for their help on the tours and the stuff that needs to be done before and after.

Karl Warsinski and Pat Quimby for their blacksmithing demonstration during our tours.

We are appreciative to the University's Marketing and Alumni Relations Departments for including the Smelter in their events again.  They made an audience available to us who would not have had an opportunity to see some of the great heritage sites in the Keweenaw.

A film about the smelter and our activities was made by students in Erin Smith's documentary media class in the Department of Humanities.  It has the quality of a professional production with the haunting touch of a Ken Burns documentary.  The student producers are: Vienna Chapin, Devin Leonarduzzi, Reyna Bennett, Megan Cole. Congratulations!

Let us know when its out.  We want to see it again.

We wish you all the best in 2014.   And for another great year of collaboration! 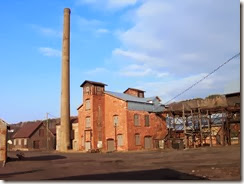 
Posted by QUINCY SMELTER ASSOCIATION at 3:04 AM No comments:

Open to the public

Posted by QUINCY SMELTER ASSOCIATION at 6:27 PM No comments:

We want to thank our volunteers who made it possible.  Its amazing the amount of work it takes to pull off these events each year.


Designing our new pamphlet
Figuring out how to set up lighting
Working with the Park Service and the Advisory Commission
Writing grants
Meetings, meetings, meetings
Recruiting volunteers
Our main misssion: Conducting tours


For all of us, the tours are our passion.


Have a great holiday season. 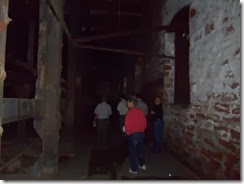 We go in dark places Some of us smile 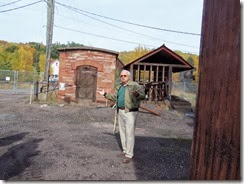 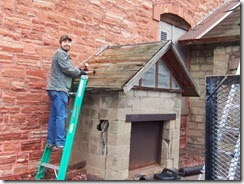 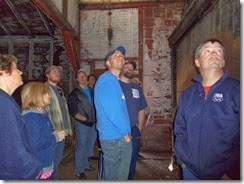 Posted by QUINCY SMELTER ASSOCIATION at 8:11 PM No comments:

This is a view of the east end where the casting machine and large No. 5 furnace sit inside. Except for the covered windows, this is how the building would have looked when built in the early 20th century.

Who would of thought galvanized steel could look this sharp? 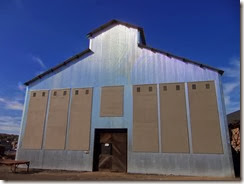